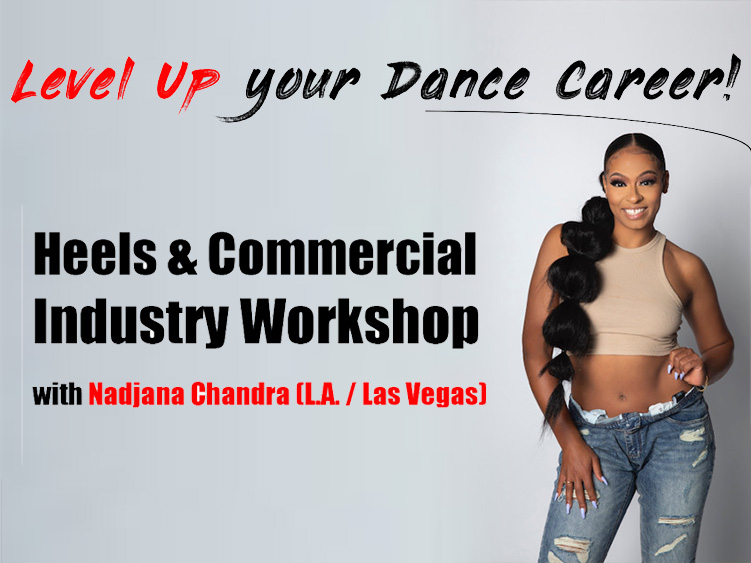 If you are looking to elevate your dance career in 2023, The Level Up Workshop is perfect for you.

Nadjana’s been working as a professional industry dancer in Los Angeles and Las Vegas for the passed 8 plus years and has performed with some of your favourite artists such as Bruno Mars, Mariah Carey, Usher, Fergie, Carrie Underwood, Snoop Dogg, Ludmilla, Ludacris, Lil John, MJ Rodriguez (from Pose), Arashi and more… She has also performed in movies and commercials on Disney Plus and Netflix.

For the first time in Munich she will host an industry workshop to share her insights & hands on knowledge:

Level up workshop consists of a commercial, heels dance and seminar portion. We will work on your dance performance, camera presence, audition tips and techniques as well as branding, goal setting and mindset. This 2 Day workshop is open to all genders and non binary and best suited for intermediate/advanced levels. Together we will discover who you are as an artist, boost your confidence on stage and in front of the camera and learn how to take charge of your career as a professional working dancer.

Nadjana is originally from Munich Germany and has undergone extensive dance training in Europe as well as in the USA. In 2011 Nadjana moved to Las Vegas to join the Las Vegas Contemporary Dance Theater. She then joined Donn Arden’s iconic Showgirl show “Jubilee”, reimagined by Beyoncé’s creative director Frank GatsonJr. During her time in Jubilee, Nadjana performed with Britney Spears and Rod Stewart. Shortly after, Nadjana performed at the Billboard Music Awards with Pitbull and Chris Brown. She has also made an appearance at R.Kelly‘s honoree Performance at the Soul Train Awards. In 2016 Nadjana became a freelance artist and dancer with MSA Talent Agency. She booked a role as lead model in Bruno Mars 24K Magic music video. Shortly after, Nadjana decided to take a leap of faith and make the big move to L.A. Two months after her big move to the city of Angels, Nadjana booked an International Tour with Fergie under the creative direction of Fatima Robinson. Performing with Fergie around the world was a major dream come true for her. Since moving to L.A. Nadjana has performed with some of your favourite artists such as Mariah Carey, Carrie Underwood, Snoop Dogg, Ludmilla, Ludacris, Lil John, MJ Rodriguez (from Pose), Arashi and more. Most recently she was honored to dance for her favourite RnB singer, USHER at the Lovers and Friends Festival in Las Vegas. She also got to walk the stage as a Presenter at the Billboard Awards 2022 alongside Heidi Klum. She is honored to have worked on Beyonce’s “Black is King” while also dancing in commercials for Apple TV Plus. You can also find her dancing in the Netflix Movie “Sarkar, and in numerous Music Videos, Award Shows and viral projects such as “Beyloween” by Tabria Majors. Nadjana absolutely loves everything she does and is so excited to share her knowledge and experience with us all. 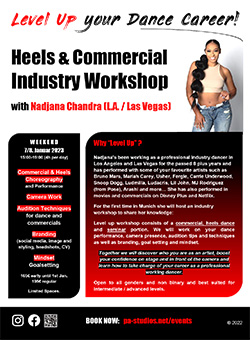